Introduction: Transplantation of pancreatic islets has been shown to be effective, in some patients, for the long-term treatment of type I diabetes. However, transplantation of islets into either the portal vein or the subcutaneous space can be limited by insufficient oxygen transfer, leading to islet loss.  Furthermore, oxygen diffusion limitations can be magnified when islet numbers are increased dramatically, as in translating from rodent studies to human-scale treatments.

Methods: An islet transplantation approach using an acellular vessel as a vascular scaffold has been developed, termed the BioVascular Pancreas (BVP). To create the BVP, islets are seeded as an outer coating on the surface of an acellular blood vessel, using fibrin as a hydrogel carrier. The BVP can then be anastomosed as an arterial (or arteriovenous) graft, which allows fully oxygenated arterial blood with a pO2 of roughly 100 mmHg to flow through the graft lumen and thereby supply oxygen to the islets.

Results: In silico simulations and in vitro bioreactor experiments show that the BVP design provides adequate survivability for islets and helps avoid islet hypoxia. When implanted as end-to-end abdominal aorta grafts in nude rats, BVPs were able to restore near-normoglycemia durably for 90 days and developed robust microvascular infiltration from the host. Immunostaining of rat islets revealed insulin-containing islets remained in the explanted samples, that also contained CD31-positive cells consistent with microvessels.  Furthermore, pilot implantations in pigs were performed, which demonstrated the scalability of the technology. 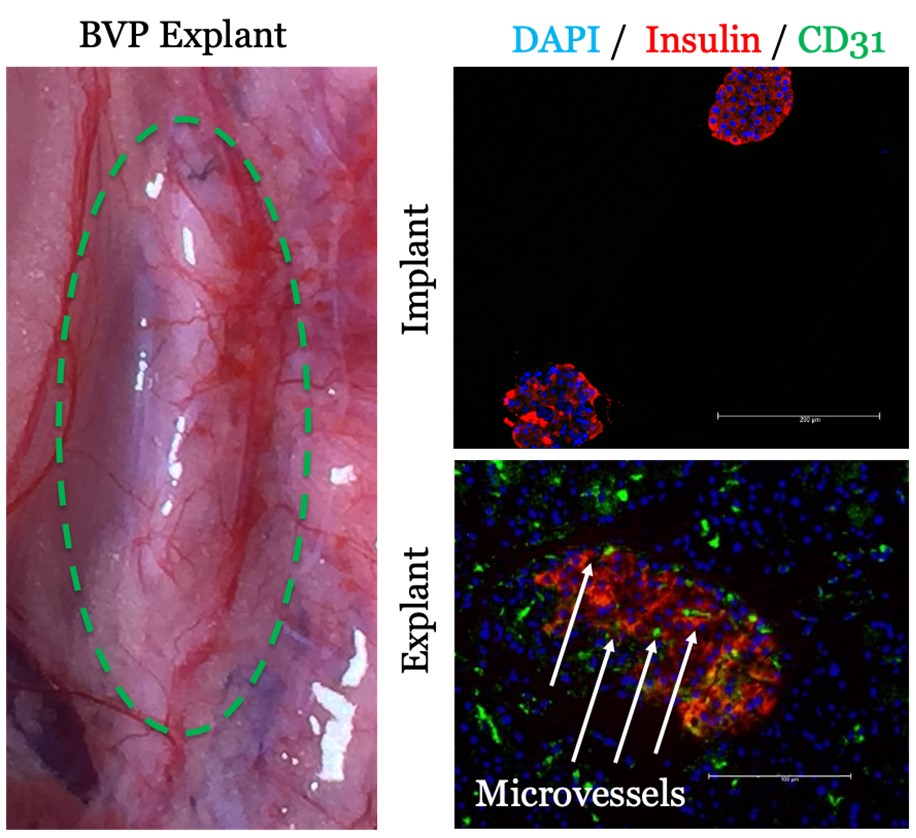 Discussion: Given the potential benefits provided by the BVP, this tissue design may eventually serve as a solution for transplantation of pancreatic islets to treat or cure type I diabetes.