Introduction: In humans, von Willebrand Factor (vWF) is quiescent until activated by collagen or shear stress, however porcine vWF behaves as if “always active” in the presence of human blood, leading to spontaneous platelet adhesion and activation and subsequent xenograft injury. Pigs have therefore been modified to express humanized vWF (h*pvWF) to reduce this interaction.
Method: A region of the porcine vWF gene was replaced with the human ortholog to generate GTKO.hCD46.h*pvWF pigs. Pairs of lungs from these pigs (n=5) were compared to GTKO.hCD46 lungs (n=5) on an ex vivo circuit using human blood. For each pair of lungs, one lung received a base regimen of 1-BIA, anti-GPIb Fab, and histamine receptor blockade, while the contralateral lung was treated with the base regimen plus integrin (H53/IB4) and selectin (GMI-1271/PSGL-1) blockade. GTKO.hCD46.h*pvWF (n=7) and GTKO.hCD46 (n=4) livers were also compared on an ex vivo circuit, treated with base regimen plus famotidine, BIA, and anti-GPIb. Base regimen was Remodulin, heparin, and insulin (n=4 GTKO.hCD46). Blood samples were taken throughout each perfusion.

Results: All lung groups had similar survival, with most electively terminated. Platelet sequestration was significantly reduced and delayed in h*pvWF lungs when compared to pvWF (p<0.01), and was not further modulated by selectin and integrin blockade(Fig.1A). CD62-P (P-selectin), increased significantly in both pvWF groups after 6 hours of perfusion compared to h*pvWF lungs (p<0.001)(Fig. 1B). Pulmonary vascular resistance was very low and constant in both groups. No significant differences were observed in BTG (platelet activation marker) levels, F1+2 (thrombosis marker) levels, or neutrophil counts. 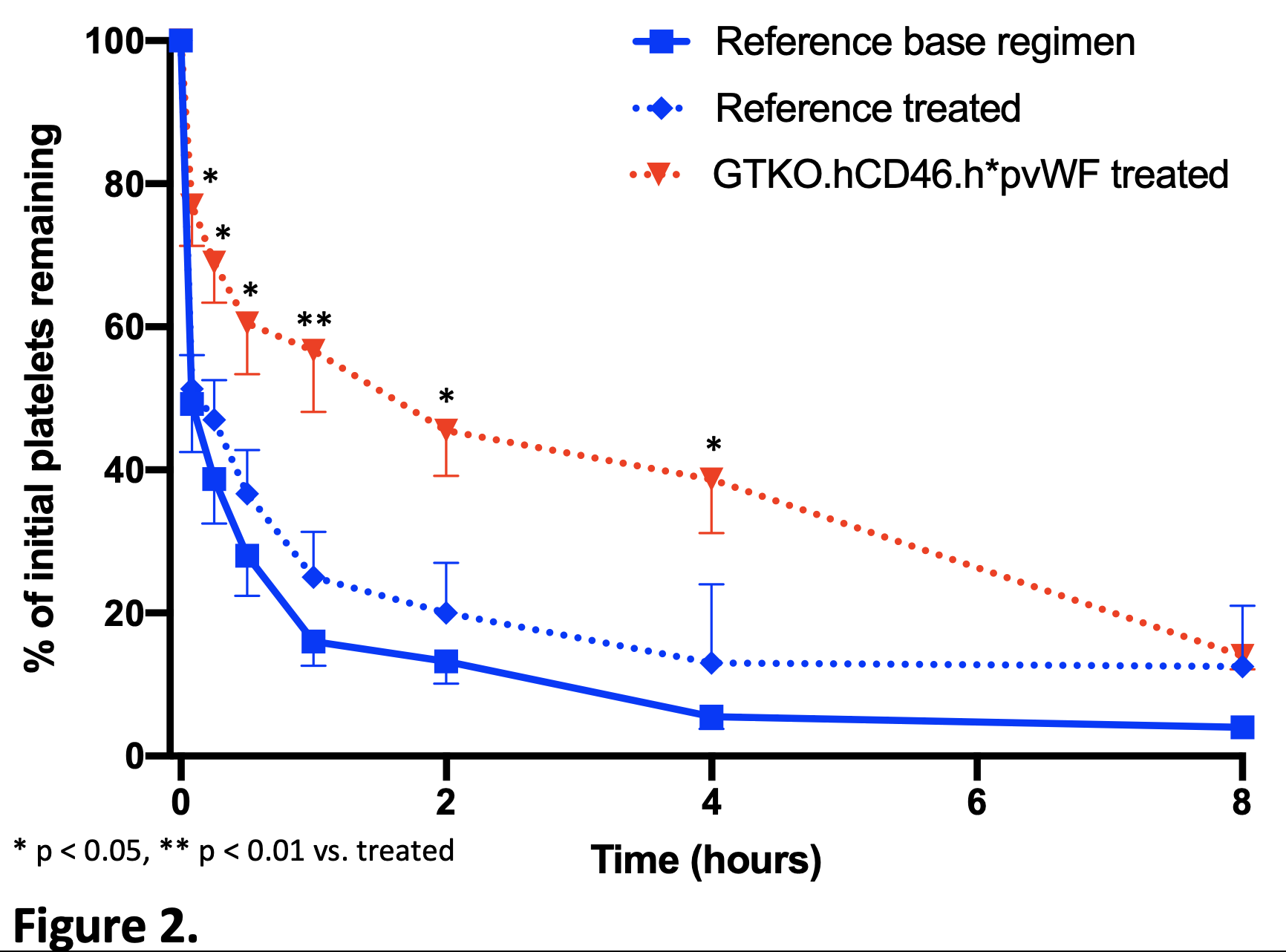 Discussion: Both lungs and livers demonstrated significant attenuation of platelet sequestration during ex vivo xenoperfusion when humanized von Willebrand factor was included in the genetic modifications. These findings are promising for reducing xenograft injury secondary to the non-physiologic platelet adhesion and aggregation process, and will be useful in conjunction with known beneficial genetic modifications. Further studies of the causes of residual platelet adhesion demonstrated in these results will focus on Fc-receptors, adenosine pathway dysregulation, activated neutrophils, and coagulation pathway dysregulation.