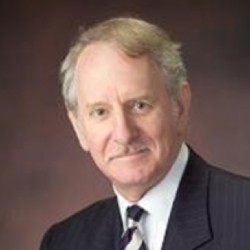 David Cooper studied medicine at Guy’s Hospital Medical School in London (now merged with King’s College London). He subsequently trained in general and cardiothoracic surgery in Cambridge and London, interrupting this training to carry out research for the PhD degree. He was present at the first heart transplant in the UK in 1968, and a member of the team that initiated the heart transplant program at Papworth Hospital in 1979. Between 1972 and 1980, he was a Fellow and Director of Studies in Medicine at Magdalene College, Cambridge. In 1980 he took up an appointment in cardiac surgery at Groote Schuur Hospital at the University of Cape Town where, under Professor Christiaan Barnard (who, in 1967 had carried out the world’s first heart transplant), he had responsibility for patients undergoing heart transplantation. With Winston Wicomb and Dimitri Novitzky, he developed a hypothermic perfusion device to store donor hearts, which was used clinically, and investigated the detrimental effects of brain death on donor organs before establishing thyroid hormone therapy in the management of potential organ donors. In 1987, he relocated to the Oklahoma Transplantation Institute in the USA where he continued to work in both the clinical and research fields. With colleagues, he identified the importance of the Gal antigen in xenotransplantation. After 17 years as a surgeon-scientist, he decided to concentrate on research, initially at the Massachusetts General Hospital/Harvard Medical School in Boston, subsequently at the Thomas E. Starzl Transplantation Institute at the University of Pittsburgh, and now at UAB. His major interest is the xenotransplantation of organs, islets, and corneas in pig-to-nonhuman primate models, with the aim of using genetically-engineered pigs as a solution to the organ shortage for clinical transplantation. The Royal College of Surgeons of England appointed him to a Hunterian Professorship (1983), Arris and Gale Lectureship (1988), Amott Lectureship (2002), and awarded him the 1997 Jacksonian Prize and Medal. Professor Cooper has published more than 850 medical and scientific papers and chapters, has authored or edited 11 books, and has given more than 300 invited presentations worldwide. Between 1994-7, he was Honorary Secretary/Treasurer of the International Society for Heart and Lung Transplantation. He was the Founding Honorary Secretary of the International Xenotransplantation Association IXA) in 1997, its President in 1999-2001, and the Editor-in-Chief of Xenotransplantation from 2001-7. In 2009, he was elected to Honorary Membership of the IXA. He has also received the American Society of Transplant Surgeons (ASTS)-Roche Presidential Travel Award (2007), The Transplantation Society-Roche Award for Excellence in Translational Science (2010), the American Society of Transplantation (AST) Basic Science Established Investigator Award (2014), and The Transplantation Society’s Award for Outstanding Achievement in Transplantation (Basic Science) (2016). In 2016 he was made a Fellow of his alma mater, King’s College London.